It’s been a while since I wrote a “how-to” guide so here is another one: how to keep your guard up in a fight.

First, a quick explanation: The focus of this guide is combat sports like MMA, muay Thai and boxing. That said, to a degree, you can use the same information for self-defense and traditional martial arts as well. In those, you sometimes have to keep your hands in a specific place, for instance on center-line, chambered at the hip, etc.  Some of the ideas I write here will apply there as well, but not all of them. As always, use whatever you can and ignore the rest.

Second, why is it important? Why is there even a need to keep your guard up in a fight? We’ve all seen fighters with low or sloppy guards beat their opponents, right?

True enough, it happens. The most popular example of this is Muhammad Ali, who routinely dropped his hands or just kept them all the way down and still beat his opponents. Here he is in action. Watch the low guard…

Here’s the thing: just because some other fighter can get away with it, doesn’t mean you can.

You’re not Muhammad Ali. Do you have his level of skill? His footwork? His speed? His elusiveness? His experience?

But all these elements are a part of why he didn’t get punished all the time when he didn’t keep his guard up in a fight. However, when he got older and slower, the low guard didn’t work anymore and he started taking beatings in the ring. So no matter how good you are, there comes a time when a sloppy guard will come back to haunt you. The reason why a high guard is important is simple: you get hit more often if you drop your guard, especially if you don’t know you’re dropping it.

As a final point, there are two parts to learning how to keep your guard up in a fight: END_OF_DOCUMENT_TOKEN_TO_BE_REPLACED

Before we get to the video where this stupid prankster gets knocked out, some background.

A while ago, I was talking to my teenage daughter about how the world is so different now from when I was her age. One of those differences is the internet and how it changed our society. For instance, now, you can make a living off being a “Youtube celebrity”. Just get tons of people to follow you on Youtube, and eventually you’ll attract sponsor, advertisers and so on. I don’t consider it a worthwhile career path, except for the few lucky ones, which is what I wanted to point out to her.

In and of itself, this phenomenon is not a bad thing. In fact, there are many YouTube professionals that offer a lot of valuable information for free in just this way. But there are also people who should be protected against their own stupidity and others who should be put in jail for the nonsense or misinformation they propagate. Case in point, the stupid prankster that gets knocked out.

You can watch the whole thing, but if you want to skip to the knock out, it’s at 2min10.

There’s obviously the stupidity of the prank itself: provoking people like this is a surefire way to get knocked out, or worse. But what’s worse is how he seems all proud of getting knocked out, as if it’s an accomplishment. The prankster probably doesn’t realize that a knock out like that can leave lasting damage or even kill you outright. When blunt trauma to the head happens, that’s always in the cards. The fact that it didn’t happen here doesn’t mean the danger doesn’t exist. Go ask an ER doctor about this if you think I’m exaggerating…

The other guy also might have hit him at an angle so he would have fallen forward, off the grassy slope and onto the concrete. An unconscious face-plant from that height usually means lots of surgery to put your skull back together, at best. But hey, it was all just a prank, right, so it’s OK… END_OF_DOCUMENT_TOKEN_TO_BE_REPLACED

One of my students likes to torment me by Googling my name and sending me links to what people write about me. I’ve learned to fear his research (he pays for it during our training sessions…) and often click away after 2 seconds because there’s only so much I can endure. Every now and then, I reply to people but over the years this has become very rare. Simply because those discussions all too often end up as shouting matches.

The latest link he sent was of a forum discussing one of my blog posts. As usual, I was impressed by how people seem to read into my words something other than what I wrote or put words into my mouth that I never spoke and then argue about it amongst themselves (straw man anyone?). Disagreement is fine, even more, it’s necessary for any real growth to occur. But all too often, egos get in the way and the flame wars get started. That’s why I have pretty much stopped participating in forums, barring a few exceptions.

I’ve written about this ad nauseam but for clarity’s sake, I’ll repeat it here: Nothing I write is gospel. This is all just my opinion and it may or may not be valid for whatever circumstances you live in. I’m just a guy, like you, with his own set of faults and virtues. If you find a use for what I write, awesome. If not, that’s OK too. Let me add to that with some more points:

So all in all, I’m just a guy who shares his opinions on certain topics. I’ve been fortunate that a bunch of people seem to find them helpful and that keeps me going, but as I explained in my post about internet experts, popularity doesn’t mean anything either. So I say again, who cares? If anything I write doesn’t make sense for you, then by all means just move on. There is nothing wrong with disagreeing with somebody. However, I believe there is something wrong if the discussion turns to name-calling and rhetorical tricks to “win”. When I see that stuff happening, I pick up my marbles and go play elsewhere. I’ve been on the internet for about 20 years now and have seen all kinds of flame wars: I’m done with those.

If you want to have a meaningful discussion, I believe it takes a level of maturity and self-monitoring to get anywhere. I always liked this hierarchy of discussion tactics. The top ones are the “best”, the bottom ones are useless, except for pissing people off: 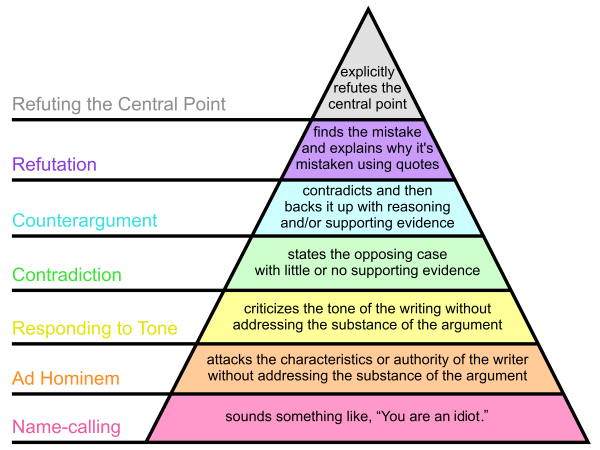 Funny thing though, what you see the most in forum discussions is the bottom three tactics along with pars pro toto reasoning. I’ll get back to that in a bit.

If you can’t have a discussion without those bottom three tactics, then I humbly submit you aren’t interested in discussing anything. Might as well quit and skip ahead to saying neener-neener.  If you are interested in exchanging ideas and debating a topic, then this flow chart is a good place to start: END_OF_DOCUMENT_TOKEN_TO_BE_REPLACED