Here’s a video showing some behavior that always baffles me: Just as a guy who’s harassing a woman is about to leave, she does everything she can to make sure he kicks her ass. Case in point:

To make my opinion absolutely clear: that guy is an asshole. Regardless of what the woman said or did, he’s an asshole for landing that leg kick. He could have broken her knee or leg, she could have cracked her skull, etc.

That said, the woman isn’t entirely without an important part of the responsibility for why it all turned out the way it did: with her ass getting kicked. Here’s how I see it:

A couple of things seem to stand out:

Just yesterday, I explained to my daughter (who has quite a personality…) that life isn’t all about her and what she wants. Other people count too and some of them don’t care what you feel or think. Or where your limits are; they’ll go way beyond them in a heartbeat and when you find out you can’t keep up it will be too late.

Here’s how I explained it to her:

Here in Belgium, you have to cross the street at the zebra crossing. When you stand there, you learn to look both ways but in actuality, the mere fact of standing there is enough to demonstrate your intent of crossing the street. All drivers approaching you have a legal obligation to slow down and stop so you can pass. It is not an option, it is a duty. It’s the law so you are well within your rights to make these drivers stop whenever you cross the street like this.

Now imagine the same situation of crossing the street; the same law still applies. But right before you take your first step to pass, you see a speeding car coming at you. He’s clearly breaking the speed limit and you can tell he won’t be able to stop in time for you. You now have a choice:

I then explained to my girl that she is still within her rights to cross the street then, but she’ll be dead anyway. So exercising your legal rights isn’t always the best thing to do. It should be, but it isn’t because human nature is what it is and not everybody plays by the rules.

Yes, the woman has a right not to be harassed by a bunch of idiots.

Yes, the asshole has no right to strike out at her the first time.

Yes, he is totally wrong in landing that kick.

But the thing is, at every step, the woman decided to prolong the conflict and make sure she got her ass kicked. She could have gotten away safe and drink some more but she chose to escalate things. The asshole being wrong and her being within her rights not to have to take his shit is the same thing as in my example of crossing the street when you spot a speeding car. It’s just stupid.

It always baffles me when people act like that. It makes me want to ask them “Which part of calling a guy names, flipping the bird and tossing your drink in his face achieves the result of him leaving you alone when that’s clearly what you want?” And then you expect not to get hit by him? Actions have consequences, including ones we shouldn’t get…

For the nitpickers amongst you:

In other words, if you have an agenda and you prefer to promote it over reading what I actually wrote here, then that’s your problem. If you prefer to nitpick over how I word certain things and refuse to see the overall message because of this, then I can only shrug and say I’m sorry you didn’t like that part. I’m fine with people disagreeing with me. In fact that’s often the best way of learning something when you debate a topic with somebody who sees things differently. But then we both have to be on the same page as to how to argue. If we’re not, then all debate is futile.

In case you’re wondering, my reasoning pretty much follows the rules in this chart: 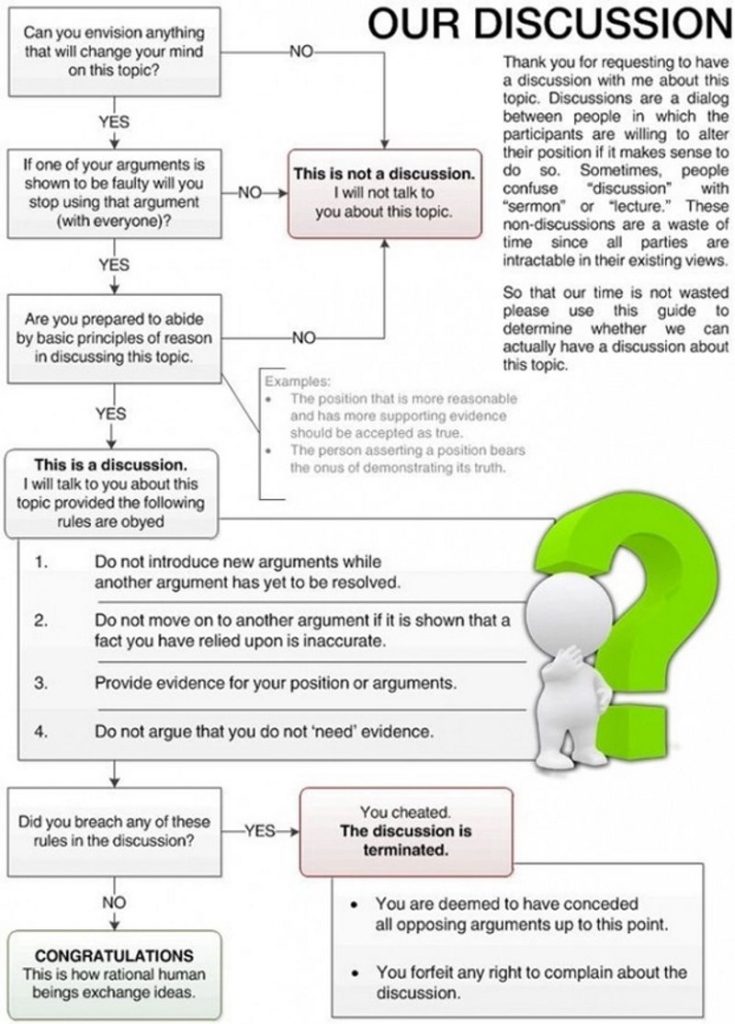 UPDATE: Rewrote the part from “For the nitpickers amongst you” and added some more after that.