A long time ago, I had a paradigm shift that changed my martial arts and self-defense training forever. To explain this correctly, I need to give you a little bit of background information:

Many years ago, I started reading the Discworld series by Terry Pratchett. Though these books take place in a fantasy world, the stories are deeply rooted in our own. If you haven’t read them, go ahead and give them a try. They’re tons of fun. Here’s the reason why I bring this up:

Mr. Pratchett wrote a series of accompanying books called “Science of the Discworld“. These books alternate a story set in the Discworld universe with chapters explaining how science works. In one of these books, he mentions “emergent dynamic systems” and “complex systems”. These concepts are complicated and hard to explain quickly, but I’ll post some resources at the end if you want more in-depth information.

For a layman’s explanation, you can view it like this:

Complex systems examine how the multiple components of a system interact with each other and cause the system to behave a certain way, but also how the system interacts and forms relationships with its environment.

The “emergent” part means that complex systems and patterns are formed out of relatively simple interactions.

When you combine these two, it means you can look at a system and create laws and theories of what you see happening and these may be true.

However, you cannot recreate an outcome from these laws and theories alone.

The specific elements involved and their interactions can give rise to radically new dynamics and behavior, completely unpredictable from previous occurrences. Or put differently, new patterns (and therefor laws and rules) become apparent as the system keeps going, instead of sticking to the previously established rules.

My paradigm shift was viewing fighting and violence as an emergent dynamic system. Here’s why:

We all form a theoretical model of violence when we train for it and after experiencing it. The problems start when we believe our model is the only possible reality. As human beings, that is exactly what we are wired to do, because violence affects us on such a deep level, it creates its own truth. We can easily convince ourselves that our model is universally true, like for instance gravity: we know it’s real, we experience it 24/7 and know that if we drop something, it will fall.  We accept the laws of physics as a given.

The issue is that the laws of physics alone aren’t enough to map out violence, let alone predict it or give your model the right structure to handle it. This brings us to emergent dynamic systems.

More on models later, but first, let’s look at how this works?

How does this work in Combat Sports?

Picture an MMA or boxing match:

Yet despite all that, you can never predict with 100% accuracy who will win.

Because differences in seemingly insignificant elements or unexpected developments can alter the outcome completely:

These were unexpected and unorthodox results, yet the rules hadn’t changed from previous fights.

Violence is unpredictable, it is chaos. That includes the violence seen in combat sports. If it were easy to predict, then there would be no betting on it, because everybody would always win…

The tricky part is that just because it is unpredictable, that doesn’t mean there are no rules and laws, that you can never predict a likely outcome. For instance:

That knee that took Sara out? Was it possible? Yes. Was it likely given everything we knew about Rousey’s previous fights? Not so much.

Now take a look at these stats and honestly make a prediction as to who you think will win: 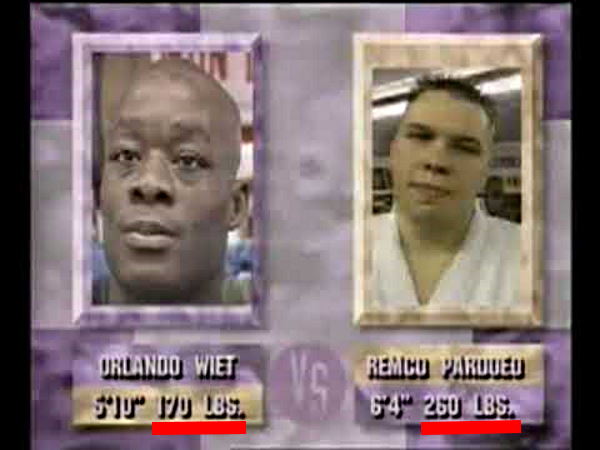 Watch the fight here to see what happened.

It’s not that Orlando was a bad fighter, not at all. He was a pretty tough muay Thai fighter in his prime, but this was the first time he fought in the UFC and he gave up almost 100 pounds to his opponent. In theory, he could still have won, but in reality, it was unlikely to happen. Anybody with even a little bit of experience in an MMA gym knows that size matters and uses this information to adjust his theoretical model.

The same applies to self-defense: yes, there are theories, models, and patterns you can use, but these do not predict nor guarantee a specific outcome. At best, they offer a framework and structure to make sense of the chaos that is a violent encounter. As you experience more encounters, you will discover different elements and models that change the way you view violence. All of these will be true. How could they not be? You experienced them first hand.

The same goes for everybody else.

But these could be completely different from yours due to the individual differences in violence dynamics that lead to different results than what you experienced. The underlying principles and laws may be the same, but the way they are manifested, both in general and in the details, can give rise to radically different results. To put it differently: if you stare too much at the forest, you miss the trees and vice versa.  When it comes to violence, both the forest and each individual tree (and branch, and twig, and leaf, and…) are important.

So how does that work?

What you’ll see is that it is impossible to predict how exactly each of these fights will go, no matter how much real-life experience you have. You can recognize certain patterns, but using those to try and predict beforehand what will happen doesn’t work in a reliable fashion. As in, the margin of error is such that you would be crazy to bet your life on it.

More than one truth can exist at the same time.

Seeing violence as an emergent dynamic system is why I often write that there is more than one right answer. Or that several people can be right at the same time about violence, even if their views seem to be opposites. This realization also made me more humble and open-minded. It meant I didn’t have to “prove” I was right and somebody else was wrong: we can both be right in our own model. It’s not zero-sum. It all depends on the specifics and the details of our models and personal experiences or observations.

There is a flip side to that coin though: it means “my” model will never encompass the totality of what violence is. I will always be limited to knowing only a small piece of everything there is to know. This doesn’t make that piece invalid, it means I have to avoid looking at my own model as the whole thing.

The second point is that studying other models, learning from others, can only make your own model bigger and better. This is why I still train with my teachers, friends and other instructors. I also still read many books, blogs and articles while also watching instructional videos. The learning never stops. The model never stops changing. At least, it shouldn’t. When you freeze your model, you become vulnerable to all the elements of violence you have yet to encounter. That is a recipe for disaster, to put it mildly.

This paradigm shift was both liberating and exhilarating for me. It pointed me to new areas of study and made me not only a better martial artist and self-defense instructor, but it also made me a better person. I hope that sharing this theory with you can improve your life as much as it did mine.

At the same time, it also gives you a better understanding of why I see Randy’s Law as critical to making continuous progress: it looks directly at how the elements interact with each other and why it matters when sometimes even a single one changes. That change can cascade the whole encounter into a completely different direction. One that may or may not lead to a positive outcome for you. So the only true solution to handling the chaos that is violence is to continuously refine your theoretical model, despite knowing it will never be perfect.

Can you disregard all of the above and just focus on techniques and being aggressive?

That can get you a long way in being effective in a violent situation. All the way up to the point when it stops working. When that happens, it fails completely and you have nothing else to use for your survival. If you can accept that, then, by all means, ignore it all.

Me, I want every advantage I can get and that includes a practical and useful theoretical framework. Even if that means I have to continuously refine it. Kind of like training techniques so they stay sharp…

It’s not either-or. You can do both at the same time.

Here are some links if you want to read more about all this.