A while ago, Mike wrote something on my Facebook page.

I have a topic suggestion for you: Making the transition from competing to coaching.

And that’s how this “How to transition from competitor to coach” guide was born.  I’ll try to give you some thoughts here but have to say upfront that I’m not the best guy to write about this. Because I’m a bit of a special case (Peanut gallery dwellers, keep your mouthes shut…) Here’s why.

A long, long time ago…

When I was 16 or 17, my teacher asked me to start class for him. He’d come in a bit later (he had a real long drive to get there) and I’d do the warm up and get everybody started. After a while, he asked me to start teaching beginners. So I did. More time goes by and I’m teaching a full class now. Fast forward a few years, and my teacher asks me to take over and run the school. Which I did.

But there’s something else:  I competed in Sanshou (IWUF rules). Think of it as kick boxing but with throws and take downs, no groundwork. Back in the day, it wasn’t all that popular so finding teachers was hard. My own teacher had fought under different rules decades earlier and he couldn’t help me much either. So I was left to fend for myself and figure it out on my own. Which explains why I’m such an opinionated asshole sometimes, but I digress…

That meant looking at all the information I could find: kick boxing, muay Thai, wrestling, judo, etc. If people competed in it, I tried to learn from that art. For the record, I don’t claim I was all that good at those arts, just that I looked for inspiration there because there were precious few books or videos on Sanshou back then.  As a result, I developed a personal, hybrid style that incorporated a lot of the elements from other arts but tweaked and adapted to the Sanshou format.  When I looked at what my fellow competitors were doing, I wasn’t that far off the mark.

I was a coach and a competitor at the same time; I didn’t transition from the one to the other.

I coached myself because I didn’t have a choice: I didn’t have the means to go study abroad and didn’t know of any local teachers who specifically taught fighting under Sanshou rules.  Obviously, I made tons and tons of mistakes. I lost to fighters I shouldn’t have because I trained in the wrong way, messed up my conditioning, didn’t know enough about strategy and tactics, etc.

Looking at the other guys out there, I wasn’t bad, but I most certainly was not the best fighter out there.

But despite all these downsides, I learned a lot. I learned to look for information, analyze it and try to apply it. The real irony is that I became a much better fighter after I had stopped competing. With some time and distance between me and the competitions, I saw things in a different light, with a better perspective. And I made huge progress in my fighting skills. But it was too late to do anything with them because there was no money in Sanshou fights (still isn’t really) and I was married, bought a house, etc.  All nice things to have but incompatible with a competitor’s life, especially one who isn’t sponsored.

The biggest upside is that it made me a better coach. Primarily because I learned firsthand what not to do and can now help my students avoid those pitfalls. Here are some of the things I picked up along the way and you can use to transition form competitor to coach: END_OF_DOCUMENT_TOKEN_TO_BE_REPLACED

This is a Sanshou footwork drill I like to do in class. It’s not terribly complicated but it’s effective in teaching certain things. Here goes:

Here’s me, getting my sanshou groove on in the drill:

I did some editing to only show the parts where I’m working or the video would have been too long. But usually, you take turns being the attacker after you finish the 5-count. The round is 3 minutes long.

END_OF_DOCUMENT_TOKEN_TO_BE_REPLACED

Here’s a cool video: a guy does a beautiful spinning back kick and knocks out his opponent during a karate tournament.  Check it out:

What I liked best: how he was sneaky about it.

If you look closely, when he starts the kick, he’s slightly out of range. His opponent spots the set-up and starts by pulling back his head to get clear of the incoming kick. Normally speaking, he’d have been fine. However, the guy on the left scoots forward on his support leg right in the middle of the kick. At which point it’s too late for his opponent to get out of the way or block. Result: instant KO.

When I started competing, I did a lot of high and spinning kicks. A couple times, I TKOed people with them. This video here reminded me of those fights a long time ago. (Crap, I’m getting old…). I’ll see if I can find a way to convert the VCR tape to digital and put it online.

In Part 1 of “How to Shadowbox“, I covered the basic reasons for this type of training. Part Two gave you some examples of how to apply them. But that still doesn’t tell you how to begin shadowboxing. There are so many different things you can do, it can be difficult to find a starting point. Especially if you’re new to MMA, muay Thai, boxing or whatever art you practice.  As you know by now, I like a structured, progressive approach in my training. So here’s an example of a shadowboxing workout. 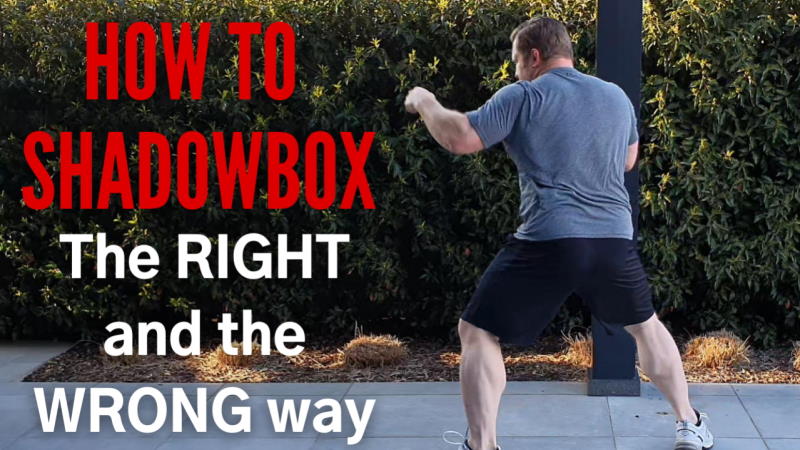 First, a couple of things:

In part one of “How to shadowbox” I talked about the different reasons to shadowbox and which mistakes to avoid. Lets take a closer look at those different variations.

Disclaimer: you can shadowbox any way you like. There are no limits to what you can do. But just because you can, doesn’t mean you should. I mean, sure, you can do three rounds of jump spinning back kicks and pretend you’re sparring a tough opponent but why would you? Fun as it may be, it’s not all that realistic.

Now we have that out of the way, how should you shadowbox?

I see shadowboxing as a way to increase my martial and self-defense skills, so I train with that in mind. That means I usually have a specific goal when I shadowbox or several goals. I believe that having a plan for each round is a more productive way of training than just winging it. That said, I invariably shadowbox for a few rounds where I just flow and go by feel, nothing planned about it. That’s OK too. In fact, that’s the whole idea: working towards the point where you can pull it all off without thinking. But you don’t get there without some planned training first, so I like to do a lot of that.

One more disclaimer: Don’t look at the technical details of what you see in these videos. If you do a technique differently, that’s fine. These clips are just illustrations of how you can shadowbox and not instructional material on specific techniques. Substitute with whatever works for you if you disagree with how certain things are done.

In this clip, you see a boxer warming up by shadowboxing: