In this episode I interview an Air Marshal who just retired and happens to be a good friend: Montie Guthrie. Montie has several decades of law enforcement experience working in several agencies, including the Border Patrol. He was kind enough to take some time to talk to me and give his perspective on the job, violence, self-defense, firearms and much more.

Just so you know, we were… helped… yeah, “helped” by an undisclosed amount of whiskey during the recording of this interview. We both felt great afterwards and I sincerely hope you enjoy our interview as well.

2. Being an Air Marshal:

First of all, Merry Christmas to all. May you have a wonderful day with your loved ones close to you.

Second, as a gift from me to you, here’s my next  violence analysis video for my Patrons available to all of you too.  In “Violence Analysis #012: Failed Gun Disarm“, I take a look at an incident caught on a security camera in an unknown location. I have no knowledge of what happened before or after, but there are still some interesting lessons to take away.

If you want to see more of these videos or simply want to support the blog, go here for an idea of everything that’s there. My Patreon page has many diferent reward tiers with something for everybody, so you’re bound to find something you like. And of course, you can sign off any time you like. One of the recurring issues I have when teaching self-defense is that many people have trouble understanding their inner dialogue. In particular, how it goes off track and leads them into trouble. There are all kinds of reasons for that, I’m not going into it today. Suffice it to say that it’s something you can see all around you, in varying degrees.

You see it in the asshole who cuts you off in traffic, almost causing you to run over a pedestrian.

Or the idiot who bumps you into an elderly lady because his being late for a meeting is just so important and you barely manage to catch her before she falls (and breaks her brittle bones).

We’ve all met those guys. 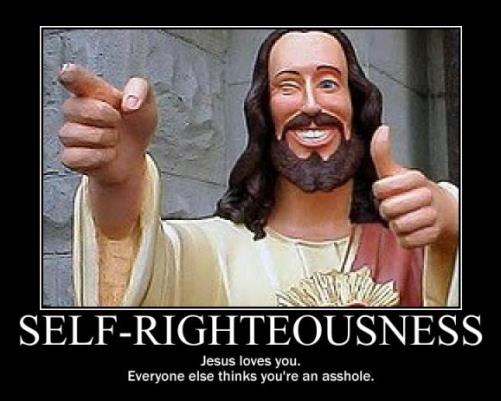 Funny thing though, if you point out how rude they are and how their actions endanger others, they get self-righteous on you and somehow you’re the unreasonable one and they’re the victim.

Truth be told, sometimes we’re that guy. Be honest now, you’ve sinned in this department just as I have. There’s a difference though: reasonable people eventually realize they are messing up and become ashamed of their own behavior. Then they try to change their ways.

Assholes don’t care, they just keep on going with the bad attitude. The problem with not caring about anything but yourself is, first of all, you’ll eventually start believing your own bullshit:

The thing these guys don’t understand is that it’s not because people don’t clap back at you or don’t beat the crap out of you for being an egotistical asshole, that they don’t want to. Regular folks don’t always fight over stupid arguments, but they can sure feel like it.

If you scare them a little by turning on your mad monkey vibe, they’ll probably back off. It works, you “win.” If that happens enough (it often does; being aggressive works very well), then this can become your reality. You might feel it is the natural order of things that you can flip somebody off when they annoy you and never suffer any consequences for it.

But now we come to a favorite quote of a scientist friend of mine:

The plural of anecdote is not evidence.

Only an idiot thinks everybody else will always restrain themselves like that.

The second problem with being a self-righteous asshole is that because of the dynamics I just described, you eventually get a sense of entitlement about it. It is your right to be an asshole and act as if nobody else matters.

Why would you learn to settle matters with a compromise?

Why would you even bother seeing things from the other person’s perspective? You’re awesome! Everybody else sucks!

Keep that attitude going long enough and your decision-making skills can lead you down a path you can’t return from. It then becomes a matter of time and chance before you act obnoxious enough around somebody who won’t put up with your shit. If you’re lucky, you get out in one piece. If not, well… Here’s a story one of my clients told me a few days ago.

He’s an avid hunter and was out with a friend and his dog, going for game birds. The hunting grounds were close to a river with a path next to it. That path is popular with cyclists and people going for a walk. So they made sure they stopped shooting well before they got to the path. His friend however made the mistake of not putting his dog back on a leash (that’s the law here) and it got in front of a guy on a bike. The guy fell. The friend went over and asked if the guy was alright, said he was sorry, it was his fault and is there anything he could do to help. You can’t really ask for more than somebody owning up to his mistake and offering reparations…

The guy wanted none of it, replied that he should kick the friend’s ass, and stepped forward. The friend lifted one arm in a defensive posture and the conversation went something like this:

After some more huffing and puffing, he got on his bike and left, buzzing my client and missing him by an inch.

Here’s the part he missed:

If you look at it from another point of view, here’s the story again:

A guy gets self-righteous at a man armed with a hunting rifle who offers him a sincere apology for an honest mistake. The guy doesn’t accept the apology and threatens to assault the armed man, while his trained dog is standing next to him along with his self-defense-trained friend who’s also carrying a rifle.

The main reason they didn’t act was to not lose access to a piece of paper.

Do you see the disconnect with reality?

Threatening two men armed with firearms and a trained dog all by your lonesome self? In what universe is that a smart move? In the one where you say “You don’t have the balls to shoot me?” and then eat a bullet?

This is the kind of slippery slope reasoning self-righteous entitlement leads to. You can see it all over the world, in all layers of society.

People get used to treating others like crap and just assume there will never be consequences because so far, there haven’t been any. But they fail to understand that it takes two to tango. They refuse to acknowledge how their behavior can put them in a situation that escalates into violence. A situation in which they don’t come out on top, at best.

Being a self-righteous entitled asshole is not the best path toward living a long and fulfilling life. In the following chapters, the author describes Cirilo’s life as a rookie police officer, his work with the Stake Out Squad, Emergency Service Unit, his life outside of the job and his competition record. In the last chapter, people who knew him reminisce on his life and tell some stories of how they remember him. END_OF_DOCUMENT_TOKEN_TO_BE_REPLACED