One of my newer students asked me a question after class, something along the lines of:

You can pretty much handle anybody in the street, right?

I replied with “Not only no, but hell no!” and seemed to get a confused look at first. I then explained that in the street, things are pretty different than in class and there are no guarantees. None at all.

Anybody can be taken out at any time. It doesn’t matter how good you are, you’re not invincible. You can always have an off day and not see it coming. Or sometimes, you just mess up. It happens.

On the other hand, it’s easy to look good in class. I mean, I’m the one showing everything, explaining how it’s supposed to be done and by default I’m the benchmark for my students. I’m supposed to be able to pull it off against them. If I can’t hack it against them, then I don’t really have much business teaching.  So I do understand why he would think I’d take on a horde of ninjas in a dark alley with one arm tied behind my back.

We talked some more and he explained how the training has made him feel more confident, more secure than if he had to throw a punch, the other guy would at least feel it. Which sparked another round of long explanations on my part (my older students groan when they see me get ready for another Castro-length speech…) covering things like adrenal stress, the difference between sports fighting and actual combat, running instead of fighting, and so on.

As I drove home that night, I thought about it some more. It’s been a long time since I started training but I remember the feeling you get when things start to come together for the first time:

And the list goes on and on. I remember some of those things from my early years. They bring a sudden rush of confidence in your abilities. In and of itself, that’s not a bad thing. It keeps you motivated to train hard and stick with the art. But it can also lead you astray from the path if the confidence is misplaced or you don’t have a sense of proportion:

I’m exaggerating but you get my point: Confidence doesn’t necessarily have anything to do with your actual abilities.

I started with judo and jujitsu when I was 14 years old and never got beyond orange belt. I switched to kung fu after a year and a half of those Japanese arts and never went back. I was about 17 when I went to train at a friend’s jujitsu school and the teacher there had me spar with two of his black belts. Not knowing any better, I swept them a couple of times and kicked them in the face. I was completely and totally amazed at how easy it was for me to land my shots. I mean, they were Black Belts™!!! And I had only been an orange belt with a few years of kung fu training.

You can bet I felt pretty damn confident after that. 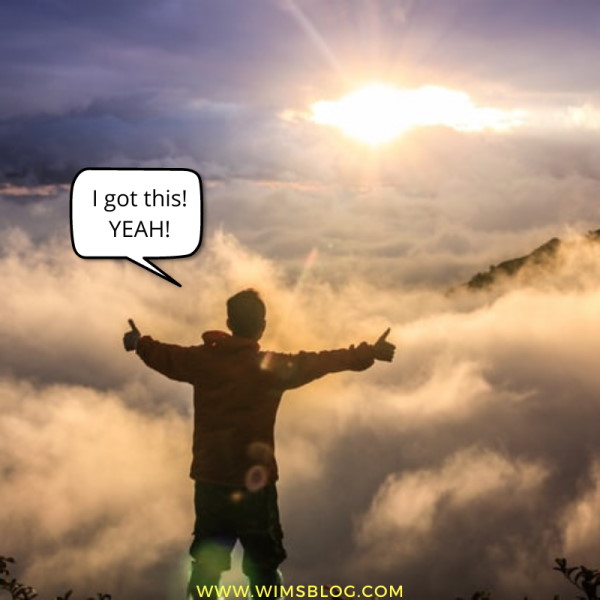 A year later I started competing in full-contact tournaments and got my ass handed to me, repeatedly. It wasn’t that I was terrible, there were just a whole bunch of people who were better.

This brings us back to my student. Those moments when the training goes well and your confidence grows, they’re magic. You should cherish and enjoy them to the fullest. But right after, you get back to training hard and try to get better. Because there’s always somebody better than you. Or, as I explained before, you might be completely overestimating your skills after that confidence-boost hits you.

Either way, there’s no other choice but to keep on training. There will always be a ratio of people who are better than you and those who are worse. The harder you train, the less there will be of the former and the more of the latter. That is, theoretically speaking. In the street, Mr. Murphy can come along any time and mess up your mad skillzzz. Which in turn brings up the whole “no guarantee” thing again.

I ended up repeating to my student what one of Loren’s instructors told him:

Your training doesn’t make you superman. It only gives you an edge.